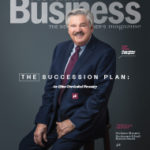 “JFK – Even in difficult times, like the Cuban Missile Crisis, he used judgment and restraint to protect us from a serious war. He persevered through health issues and his speeches rallied people to break down cultural barriers.” Farhan Naqvi | Managing Partner Naqvi Injury Law “Lyndon Johnson – He was thrust into office after Kennedy’s assassination and his leadership at that … END_OF_DOCUMENT_TOKEN_TO_BE_REPLACED

During the recession, Nevada’s Boulder Dam Credit Union (BDCU) moved from the black into the red, primarily due to loan losses, said President and CEO Eric Estes. It weathered the financial decline by shrinking assets and shares. After three and a half years in the doldrums, the credit union’s health began to turn around. BDCU now has been profitable for about 18 months, … END_OF_DOCUMENT_TOKEN_TO_BE_REPLACED