This page provides the latest feature content on Nevada Mining from Nevada Business Magazine, plus additional 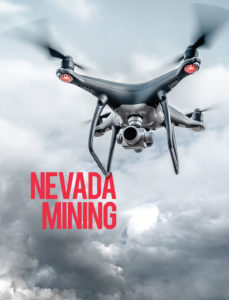 Imagine if mining companies could send an unmanned aerial vehicle, instead of a person, into a dark, narrow underground area to document the landscape or the scene following an industrial accident. Well, the Autonomous Robots Labs (ARL) at the University of Nevada, Reno is developing the technology for autonomous aerial robots to do just that, to explore, survey, map and monitor underground mines when they can’t rely upon an operator’s vision or the Global Positioning System (GPS).

Earlier this year, the team conducted multi-day tests of its mine inspection robotics in the field, which demonstrated “full exploration autonomy of underground drifts and headings using aerial robots,” according to the ARL. [Read the full story]

Industry Focus: Mining
Executives from mining organizations throughout the state recently met at the Reno offices of City National Bank to discuss their industry and dispel some of the common myths about miners. [Read More]

The Silver State & So Much More: Mining in Nevada
Nevada has been known as “The Silver State” since it entered the Union in 1864, but these days, it’s equally famous for gold, lithium, molybdenum and a host of other minerals. [Read More]

Mining: It’s About More than Gold
The value chain for Nevada’s roughly 20 metals and minerals begins with companies mining the resources. [Read More]

Mining in Nevada: The State of the Industry
The state, and hence the future, of Nevada’s mining industry may hinge less on what legislators and Nevadans think of Senate Joint Resolution 15 (SJR15). [Read More]