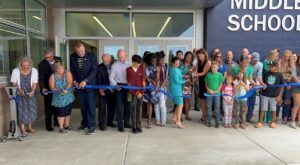 The new three-story building was constructed on the original athletic fields and has been redesigned to include 24 standard classrooms, 12 math/science labs, five flex labs and one culinary lab, six group/team rooms, three music rooms, two special education rooms, and one art room. A new gym, fitness and weight room have also been included in addition to a family resource center. TSK designed the building to meet energy efficiency standards with a geothermal heat exchange system and drought tolerant landscaping. Given the limited available site area, the new building is designed to be more compact and use space more efficiently than other middle schools in the district without reducing classroom and activity space.

“We are excited to celebrate the redesign of O’Brien Middle School in Reno,” said Windom Kimsey FAIA, LEED AP, president and CEO of TSK Architects. “Kevin Kemner put in countless hours working to design a building that reflects our commitment to excellence and the Washoe County School District’s dedication to its students. This project is near and dear to our hearts and would not have been possible without the collaboration of our partners. Congratulations to everyone involved and we look forward to hearing of the continued success of the O’Brien Middle School students.”

The building project for O’Brien Middle School was made possible by the passage of the capital funding ballot initiative in 2016. Prior to this expansion, the original facility did not allow for sixth graders to be in the same building as their seventh and eighth grade peers.