The Problem Solver show would like to acknowledge this day in history when, 56 years ago on June 13, 1966, the Supreme Court of the United States overturned the conviction of Ernesto Miranda in Miranda v. Arizona, laying the groundwork for what would become known as the Miranda Warning. 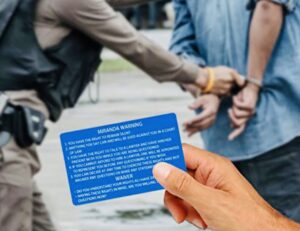 Ernesto Miranda had signed a confession and was convicted. Upon review of the case, the ACLU discovered he had not been adequately informed of his rights and challenged the State of Arizona’s conviction against Miranda. After numerous appeals, the case was argued in front of the Supreme Court which overturned Miranda’s original conviction and created guidelines to be followed by each state to inform detainees of their legal rights. This landmark decision emphasized the importance of the Fifth and Sixth Amendments of the United States Constitution. The Miranda opinion, written by Chief Justice Earl Warren, a former prosecutor and Attorney General of the State of California, is a testament to our country’s commitment to protecting criminal rights. Warren declared that police intimidation threatens human dignity, and that the best way to preserve it is not through the Fifth or Sixth Amendment rights alone, but through a marriage of the two: The Fifth Amendment privilege against self-incrimination via the Sixth Amendment right to a lawyer to protect the privilege. The now well-known ruling created the following statement, customarily given by police to criminal suspects in custody:

The Problem solver show which is hosted by retired police officers, David Kohlmeier and a Danny Minor understands the importance of these rights, and want to make sure people are knowledgeable  and educated about their rights. ” said David Kohlmeier, Host if The Problem a solver and retired Henderson Police Officer. Because we are acknowledging this specific day in history, The problem solver show is offering a free strategy session to anyone facing criminal charges with a network of attorneys in Clark County. This will also be giving out Miranda cards via Mail so that people can keep it in their wallet. They can go to www.theproblemsolver.vegas and click on Miranda Card.

On this anniversary of the monumental Miranda case, we would like to let the media know our team is available for on-set or in-office interviews on Miranda Rights and how they have been a staple of the United States Criminal Justice system for the past 53 years.