You are here: Home / Features / Feature Story / Something for Everyone: Tourism in Nevada 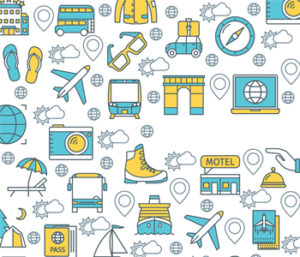 Nevada is still finding its place in the modern tourism world, but that isn’t hurting tourism numbers.

Fiscal year 2018 was a turbulent year for tourism, in Las Vegas especially, but the year still set records and showed no signs of slowing down. Statewide, shifting consumer interests and demands and diversifying economies are helping drive continued strong tourism statistics.

The October 1 shooting slowed tourism in Las Vegas for a few months, but the market recovered soundly, according to Steve Hill, president and COO of the Las Vegas Convention and Visitors Authority.

“The year started and ended strongly,” Hill said. “The shooting was a terrible thing and had some impact on visitation from a business standpoint in the fourth quarter of 2017 and the into the first quarter of 2018. The market has recovered strongly the past three months.”

Las Vegas recorded 47.7 million room nights occupied at $129.45 average nightly rate, according to the UNLV Center for Business and Economic Research, or CBER.

Meanwhile, Reno saw more than five million visitors for the first time since prior to the Great Recession.

Gaming has remained a steady driver of the Nevada economy, with revenues surpassing $1 billion in four of the first five months in 2018, according to Hill. In 2017, Nevada recorded $11.5 billion in gaming revenues with 56 million visitors, according to CBER. Gaming revenue in 2017 alone in Clark County was $9.978 billion — $7 billion on the Strip — with 45.7 million visitors.

“It continues to be a smaller percentage of overall revenue for all of the integrated resorts,” Hill said. “It’s still an important component. Gaming has stayed strong and steady, but other things continue to grow and outpace it.”

Among the other attractions outpacing gaming growth are dining, shopping, night and day clubs and spas and resorts. Also adding onto the growing resort amenities is a full sports economy, including the entry of the Vegas Golden Knights.

“They’ve added a dimension we’ve never had before,” Hill said.

In Reno, a diversified economy is adding to the tourism numbers, said Phil DeLone, the president and CEO of the Reno-Sparks Convention and Visitors Association.

The Tahoe-Reno Industrial Center (TRI) continues to add jobs from high tech companies from California. Those also bring in tourism. DeLone added that the population has grown to 615,000 and could reach nearly 750,000 by 2024. DeLone said, along with many of the new residents, the main market for tourists remains Northern California and the Pacific Northwest.

“That has all brought a lot of people to town,” DeLone said. “Reno has successfully climbed out of the recessionary period and our 15,800 first-class hotel rooms have been doing exceedingly well with hundreds of millions in refurbishment and new construction.”

McCarran International Airport continues to see record traffic, including 4.36 million passengers in May, the highest count in history. It was the 15th straight month of passenger growth and puts 2018 on pace to surpass 2017’s record number of 48.5 million passengers. McCarran is the eighth busiest airport in the nation.

Hill said the airport is continuously adding routes, but most notable are the 17 extra routes added for the 2019 Consumer Electronic Show to bring more attendees from Europe.

The Reno-Tahoe International Airport welcomes approximately 7,400 daily passengers into its airport, up from 5,300 passengers in 2013. The airport’s 4 million travelers in 2017 were a 9.6 percent increase from the previous year.

“This region is exceedingly strong,” DeLone said. “People are coming here to experience it for business and holiday activities.”

A U.S. Supreme Court ruling legalizing sports betting outside of Nevada allows the rest of the country to steal business from the state’s sportsbooks. Hill, however, believes the ruling will actually benefit the state, as the city’s major economic players can grow outside of the state with the movement.

“It will ultimately be beneficial,” he said. “Certainly what is beneficial for our major companies is beneficial for Las Vegas. You can see a correlation. When we went through the Great Recession, the strength that the companies in Las Vegas saw in Macau was beneficial in helping them weather the storm. Without Macau, it would have been a much different end result.”

Hill also said the proliferation of legal gaming across the nation is better for the state and city as a whole, and without it, professional sports in Las Vegas might never have happened. He added, the continued expansion only eases the future attraction of professional franchises.

In the past year, Las Vegas has added the National Hockey League’s Knights, along with the Women’s National Basketball Association’s Las Vegas Aces. The city has also added the Las Vegas Lights, a second-tier professional soccer team. Already in place was Las Vegas’ Triple A baseball, the Las Vegas 51s. Reno also has established sports teams, including Triple A baseball team, the Reno Aces, the USL soccer team, the Reno 1868 FC and the Bowling Hall of Fame.

Finally, the National Football League’s Oakland Raiders are set to start their Las Vegas residency in 2020. The Raiders stadium, currently under construction, is expected to host 46 annual events, Hill said. Ten of those would be NFL games with the Raiders, another six would be UNLV games and the remaining 30 would be additional events. Attending 46 events would be an estimated 1.9 million visitors, of which 27 percent, or 450,000 people, would be in Las Vegas purely for the event. That activity could potentially create 6,000 jobs, Hill said.

Along with traditional sports is the growing general interest in esports and Southern Nevada is jumping into the trend feet first. Most notably is the Esports Arena Las Vegas, a 30,000-square-foot arena within the Luxor pyramid. The facility is one of Allied Esports, at least, 10 planned esports arenas in the next three to five years. This particular arena has its food menu designed by José Andrés who, along with his daughter, is a big gamer.

Also launched recently is the Esports Gaming Lounge at Rio Las Vegas. There’s also the Millennial Esports arena at Neonopolis in downtown Las Vegas, a 15,000-square-foot venue for esports tournaments, teambuilding and product launches. The major gaming corporations will be on board soon if they’re not already, said Robert Rippee, the director of the UNLV Hospitality Lab at the International Gaming Institute.

“It’s not anything new,” Rippee said. “Contrary to what a lot of people might think, its emergence in Nevada business has been going on for several years and has picked up speed the last year or so, primarily because the large casino operators are rolling out their esports operations.”

Rippee said esports can sound bizarre for baby boomers or people who’ve never had an interest in video games, but the industry is becoming quite lucrative. So much so, big companies and sports organizations are getting into the action. There’s ownership crossover with some professional sport franchise owners also owning esports teams and professional organizations jumping into the action. The Golden Knights have a Twitch channel, a social media app that streams video game sessions. The app allows NHL players to interact with fans while they play video games.

Players in the esports industry are also seeing their salaries rise significantly.

“If you’re young, and always played, video games comprised a big part of the entertainment,” Rippee said. “It will continue to accelerate with more operators introducing or modifying facilities to create different venues, arena to lounge size, integrated with other forms entertainment.”

As demographics shift, the visitors coming to Las Vegas change and the resorts contemplate their marketing efforts, Rippee said it makes sense there’s a bigger push into a hot trend like esports. As Hill mentioned regarding the revenues on the Strip, they’re growing quickly outside traditional gaming.

“Casino operators are trying to find a younger crowd and offer them the best online casino experience as that’s where their demographics have moved to,” Rippee said. “They need to replace the traditional visitors with a new customer and that new customer has different behaviors and [casinos] need to evolve and innovate.”

The state announced this spring it would spend more than $40 million in a multi-year contract with three companies to market Nevada’s rural attractions.

This year, the Nevada Commission on Tourism, or NCOT, also approved over $1 million in rural marketing grants to promote tourism in rural parts of Nevada, which generally see overall tourism spending of $2.3 billion, according to the commission. The NCOT also approved $200,000 in grants funding 25 tourism infrastructure projects across the state.

“This grant program helps Nevada communities make infrastructure improvements that will enhance the visitor experience,” NCOT Chairman and Lieutenant Governor, Mark Hutchison, said in a press release. “That’s important because visitors, and the business they bring to Nevada, are crucial to our economy. About $3.2 billion in state and local tax revenue is generated by the travel industry.”

The efforts by the state as a whole continue to build on the traditional tourism, economic and population centers of Las Vegas and Reno.

“Las Vegas and Southern Nevada is developing a broader reputation than only what happens on the Strip,” Hill said. “Las Vegas is a great launch point of tours of state and national parks in the region.”

DeLone said the same for the Reno-Tahoe area. He mentioned the highest concentration of ski areas within 45 minutes of downtown Reno and the “pristine” Lake Tahoe.

“For a certain market, gaming is still a draw,” he added. “But over the past two decades you’ve seen a proliferation of gaming in multiples jurisdictions. The novelty of gaming is commonplace today. I think our younger millennial generation wants to be entertained and experience other things, like sports outdoors. Nevada itself is great for outdoor recreation of all kinds: hiking, cycling, golf, fly fishing, off-roading, you name it. Those younger people discover these pockets of interest and they end up repeating their visitation.”

Hill is excited about growth from within the general tourism industry in Las Vegas. He pointed to the construction at Resort World and the Wynn properties as projects for enthusiasm. Hill stated there’s nearly $11 billion of investment near the expanding Las Vegas Convention Center.

“We’re excited about the destination starting to grow again,” he said. “We haven’t had a significant or sizeable resort in 11 years by the time it opens. We’re obviously seeing growth and that only comes when investors and companies see the opportunity to fill new rooms.”