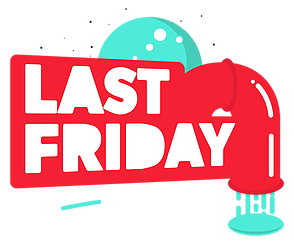 The UNLV College of Hospitality alumni booth will feature a hoop contest for both adults and kids. Score a hoop and win a beer if you are 21 and over or score a hoop and win a mini donut from Donut Mania if you are 20 and under donated by Brett Raymer, Owner of Donut Mania and star of Animal Planet’s hit series, TANKED. UNLV will be accepting $1 donations for the challenge with 100% of proceeds going towards the UNLV Harrah Alumni Scholarship Fund.

The UNLV College of Hospitality Alumni Chapter booth will also be selling tickets at to the 44th Annual UNLVino, with a chance to win a free ticket. During the event, tickets to UNLVino will be available for $75 each to UNLV Alumni and for $150 each to the general public. Tickets to UNLVino can also be purchased online at unlvino.com prior to the event, or for $175 at the door the day of the event.

This month’s event will also continue to feature the much-celebrated Friday Night Food Challenge, hosted by Season 12 Hell’s Kitchen winner, Chef Scott Commings, at the main stage with ample seating and lighting to the enjoyment of food enthusiasts everywhere. The foodie challenge consists of a series of secret ingredients and items preselected to prepare 1-2 menu items in 45 minutes or less, judged by three local judges. The judges are food writers, critics, members of media or industry related professionals.

In the spirt of March Mayhem, it’s a re-match between two 2017 Friday Foodie Challenge Winners, Chef Robert Lomeli and Chef Jainine Jaffer! This is a must-see event which begins at 6:30 p.m. at the amphitheater with ample seating for all. Last Friday’s Friday Night Food Challenge has featured Las Vegas valley’s both top chefs from Chef Stephen Hopcraft at STK, Chef Robert Lomeli previously at Hell’s Kitchen, Chef Matt Fresinski from Mercato Della Pescheria, and more who have all battled for the salami.

The live music line up for this event includes performances by Jeffrey Trower, an interactive rhythm experience which boasts 150 instruments from small shakers to big full-size drums. Also performing is Rich Femenella and the Chris Hermes Band featuring Kelly Ybarra.

Last Friday, JAWS Festival is complimentary and will take place on Friday, March 30, 2018 from 6:00 p.m. until 10:00 p.m. at the historic Water Street District located in Downtown Henderson. Last Friday was founded to resurrect and celebrate the community’s emerging arts and culture. The City of Henderson and other deep seeded Henderson community driven partners such as the Las Vegas Weekly, Findlay Las Vegas Volkswagen, M Resort, Lotus Broadcasting and T-Mobile sponsoring our Last Friday event this month. Other sponsors include Verizon and Helix Vodka. Join Last Friday and bring the whole family!