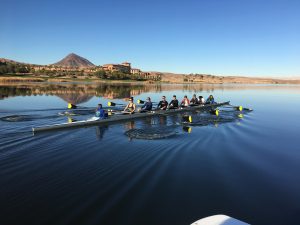 The Junior Rowing Program is not affiliated with a particular high school. Boys and girls teams will compete against teams from other states. No experience is required. The first two weeks of the Junior program are free, followed by a monthly $120 fee.

Rowing programs are coached by Jim Andersen, an experienced rowing coach from Marin Rowing in Larkspur, Calif., and Riversport in Oklahoma City. He has coached multiple national championship teams; and many of his former athletes have gone on to successful college teams, and a few have become Olympic athletes.

Called the “ultimate team sport” because participants must move together to properly advance the boat, rowing is one of the fastest growing sports in the country. Prior to the Lake Las Vegas Rowing Club’s formation last year, Las Vegas had been the only metropolitan area among the top 25 populated areas without a rowing program. For high school boys and girls, rowing provides a rigorous competitive sport that’s free from injuries and offers collegiate benefits. For women, there are opportunities for NCAA scholarships at more than 145 colleges and universities offering rowing through the enforcement of Title XI since 1997; for men, there are recruitment opportunities to Pac-12, Ivy League and other schools.