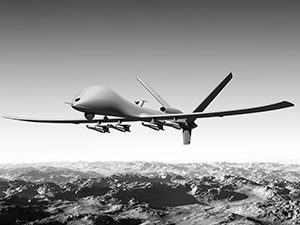 Seeking to benefit from the anticipated, widespread commercial use of the unmanned aerial vehicle (UAV) nationwide, Nevadans have been working diligently to cultivate an industry around this type of aircraft.

Integration of unmanned aerial vehicles into the U.S. would create more than 100,000 jobs and have an economic impact of $82 billion nationally by 2025, estimated the Association for Unmanned Vehicle Systems International, a non-profit organization devoted to advancing unmanned systems and robotics. The Silver State wants to be a part of it and is working hard on that front.

“Even if we only see 10 percent or are only able to capture 10 percent of that market, that’s $9 billion,” said Tom Wilczek, the defense and aerospace industry representative at the Nevada Governor’s Office of Economic Development (GOED). “We absolutely see a value added in terms of developing a cluster in Nevada specific to UAV development. It’s a new chapter in Nevada.”

A UAV, also known as a drone or remotely piloted aircraft, is a platform that’s controlled or piloted remotely. The simpler ones operate like a remote-controlled airplane, where it transmits a frequency that the platform captures. Others operate more like fixed-wing aircraft or helicopters, except they are piloted from afar.

Today, in Nevada, use of UAVs is limited to the military for Department of Defense purposes, and to individuals or groups as a hobby or for recreation. The Federal Aviation Administration (FAA) allows only this type of use in the National Airspace System (NAS) and limits those systems to ones weighing less than 55 pounds. The agency currently prohibits broad-based use of any sized drones for commercial purposes. For that reason, the UAV industry has much room to grow.

“[It] is more in the test and development phase rather than a set up their manufacturing operations phase,” said Mike Kazmierski, the president and CEO of the Economic Development Authority of Western Nevada.

The one exception to commercial flying is an entity that is awarded an FAA Section 133 exemption. This allows for flights of UAVs under 55 pounds at or below 200 feet during daytime conditions, within visual line of sight of the pilot, and at certain distances away from airports or heliports. One Silver State UAV company that received such an exemption from the FAA is ArrowData LLC in Las Vegas, which provides data collection, transmission, analytics and distribution of aerial images for a variety of purposes. The company has developed software that allows for real time analytics of aerial imagery with end-user applications for emergency situations among others.

Anyone wanting to fly outside of the established Section 133 parameters must apply for a separate certificate of authorization. However, it likely won’t be long before Nevada routinely sees small drones being flown for commercial purposes, as the FAA is developing its small unmanned aircraft system (UAS) rule around that. It’s due out “soon,” according to the agency, which Wilczek said could potentially be in 2016.

GOED continues identifying the various applications for UAVs. “The uses that are being advanced for this industry grow every day,” added Wilczek. “Companies based in Nevada and providing services across the U.S. is what I want to see; the hiring, employment and headquarters in Nevada.”

The numerous applications, all in the preliminary evaluation phases, include inspections of various infrastructure, such as bridges, pipelines, phone lines, flare stacks and others. In agriculture, UAVs could be employed to fly over crops and collect data on various metrics, including weed and pest infestations, crop patterns, distressed plants and more. In mining, they could, from the air, help exploration companies identify precious metals and minerals in the ground. They could aid in disaster relief, fire suppression, search and rescue and be employed for other humanitarian aims. In addition, drones could be used for delivery of anything from medicine to retail goods.

Drone America in Reno designs, manufactures and delivers an array of UAVs. Its Phoebus Mk.III, for instance, can be fitted with various sensors and payloads for different uses. This 4-foot, 4-inch high vehicle has a payload capacity of 180 pounds and can remain airborne for more than seven hours at a time.

EDAWN, too, is playing a role, responding to inquiries and working with interested companies.

“We work with our many partners, including the Airport Authority and the state, to encourage the testing with the expectation that as time goes on and production increases, we become a preferred location for that effort,” Kazmierski added.

Growth is occurring, Wilczek said, in the number of companies directly involved in, or supporting, Nevada’s UAV sector. Some of those enterprises include:

“Because there’s so much expertise and willingness and excitement generated in all portions of the state, we’re all happy to see these growth segments occur wherever they occur,” Wilczek added. “We’re just going to continue to push the growth of this industry.”

Nevada is an ideal place to foster a UAV industry as it’s actually where it began 40 years ago, with development of unmanned aerial systems by the military, Wilczek said. That component continues today, particularly at Creech Air Force Base, located in Indian Springs, where UAV training and flights occur. Because of that history, Nevada is home to numerous individuals with the requisite technical expertise, some of whom now, after retirement from the service, act as consultants or run their own UAV-related businesses. One veteran-owned consulting and engineering firm is Global C2 Integration Technologies in Henderson. It specializes in integrating surveillance and reconnaissance into combat action. The Silver State also has a homegrown pool of military-trained UAV pilots.

Governor Brian Sandoval and the state’s congressional delegates and legislators support and have contributed to advancing a UAV industry here. One effort was the passing of Assembly Bill 161, which provides a financial incentive to aircraft companies. The law, which became effective July 1 of this year, partially waives certain property or sales and use taxes for those who own, operate, manufacture, service, maintain, test, repair, overhaul or assemble an aircraft or any component of an aircraft, manned and unmanned, in the state. Through Assembly Bill 239, which also recently passed, the legislature established rules for civil use of drones.

Nevada is one of six states designated as FAA UAS test sites, or places for research and development and creation of technological strategies for integrating UAVs into the NAS. The Silver State has nearly 40 centers where testing can occur. They include the four originals—Reno Stead Airport, Fallon Municipal Airport, Boulder City Municipal Airport and the Desert Rock Airstrip.

“It means we are one of the preferred entities for the industry to come to for testing,” Wilczek said. “It’s also given us a really unique and very valuable perspective as a team member into the FAA’s intent and how they go about doing the integration process.”

The state-sanctioned non-profit organization that helped Nevada navigate through the competition for FAA UAS test site designation is the Nevada Institute for Autonomous Systems/Unmanned Aerial Systems (NIAS/UAS). Today, with Wilczek as its executive director, NIAS/UAS manages the business tied to that responsibility, acting as an intermediary between companies and the numerous airports involved and helping attract industry, said Jim Fleitz, retired Air Force commander, pilot and UAS expert at NIAS/UAS.

As a result of becoming an official FAA test site, the Silver State landed a $5 million contract with NASA, which means the space administration will test UAVs in the state’s air space at one or more of its available test sites.

Several Nevada educational institutions have jumped on board to help expand Nevada’s UAV industry, too. The University of Nevada, Reno (UNR), and the University of Nevada, Las Vegas (UNLV) now offer minor programs of study in unmanned autonomous systems, in which students learn UAS fundamentals, including design, engineering, operation and data analysis in preparation for work in the field. The industry needs engineers, programmers, pilots and robotics specialists, and Nevada’s universities want to produce a local workforce to fill those jobs. Reno’s Truckee Meadows Community College offers UAV maintenance courses as well.

In 2014, UNLV hired world-renowned UAS research expert, Dr. Paul Oh, to be its director of drones and autonomous systems lab. Professor Woosoon Yim, of UNLV’s department of mechanical engineering, is conducting research on a robotic aerial platform that operates autonomously in GPS-denied environments, such as caves, forests and other urban structures. Some former UNLV students launched the enterprise Skyworks in Henderson, which develops aerial robots for scientific and industrial uses.

“We want to create those jobs so graduates stay here, and grow those businesses so they want to come here and get those graduates we’re pumping out of the university,” said Lt. Col. Warren Rapp, NAASIC’s business development director. Rapp is a former UAV pilot and squadron commander at Creech AFB.

The types of businesses the center can support are those with a tested prototype with high commercialization potential, Rapp said. One UNR partner is Flirtey, an autonomous aerial delivery company of online retail, fast food, letters and parcels, urgent medical supplies, which moved to Reno from Australia. Alaska UAV, which also relocated, is another. The Sparks-based UAS manufacturer and service provider has hired some UNR engineering students.

Experts are optimistic about the future of Nevada’s UAV industry. “It’s very bright,” Wilczek said. “There are a lot of hungry businesses and a lot of investors.”

Nevada is on the cusp of the burgeoning sector, and the FAA’s release of its small UAV rule should help it expand.

“We are so close to starting to realize those next-level contracts that really will set Nevada apart,” Fleitz said, adding that the existing support network must remain intact to achieve that greater success. “The governor, congressional delegates and the elected officials have to continue to support this industry, to make the state friendly for this type of testing.”