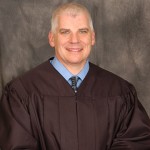 Reno, Nev. – The Honorable Egan Walker of the Second Judicial District Court, Family Division, Washoe County, has joined the National Council of Juvenile and Family Court Judges (NCJFCJ) as a member of the board of directors. Judge Walker was appointed by Governor Brian Sandoval to serve as the presiding judge in Department 2 on March 10, 2011, and then elected to the … END_OF_DOCUMENT_TOKEN_TO_BE_REPLACED