The Nevada System of Higher Education (NSHE) Board of Regents voted to approve a new Master’s Degree in Speech-Language Pathology (SLP) at Nevada State College. It will be the first master-level degree to be offered at the state’s only four-year college. The Master of Education (MEd) in Speech-Language Pathology will train students to become certified speech-language … END_OF_DOCUMENT_TOKEN_TO_BE_REPLACED 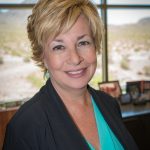 June 1, 2017 marked a new beginning for Nevada State College when Dr. Vickie Shields assumed her role as the institution’s new Provost and Executive Vice President. Dr. Shields, who was officially named to the position in December, will serve as the College’s chief academic officer and oversee the institution’s educational offerings. She’ll also play an important role in … END_OF_DOCUMENT_TOKEN_TO_BE_REPLACED