HENDERSON – Leadership Henderson recently announced its class of 2017, the 17th graduating class of the program offered by the Henderson Chamber of Commerce Foundation. The 26 community and business leaders will receive more than 30 hours of professional leadership development training, which began with a kickoff event Oct. 13 and will continue through May. During the next … END_OF_DOCUMENT_TOKEN_TO_BE_REPLACED

Board took office July 1, will be sworn in Sept. 3 at State of the Chamber Address HENDERSON, Nev. – The Henderson Chamber of Commerce has named the members of its 2015-16 executive board. The board took office July 1 and will be sworn in Thursday, Sept. 3, at the annual State of the Chamber Address. The following were named to the executive board: Tim Brooks (Emerald … END_OF_DOCUMENT_TOKEN_TO_BE_REPLACED 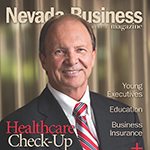 There’s no shortage of uncertainty swirling around Nevada’s healthcare industry: from the challenges of the local and national economies to insurance regulations and the implications – even the contours and very existence -- of Obamacare. The outlook, however, is decidedly optimistic. And with good reason. “One of the advantages of healthcare is that it’s been projected … END_OF_DOCUMENT_TOKEN_TO_BE_REPLACED

Clark County Voter Registration Rises in Mid-2011 According to a report from Applied Analysis, new voter registrations in Clark County rose during the second quarter of 2011, an occurrence likely due to the lead up of municipal elections in June.  Additionally, there has been a downward trend in Democrat registrations, which has come largely at the expense of rising interest … END_OF_DOCUMENT_TOKEN_TO_BE_REPLACED