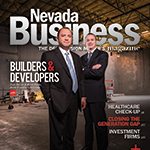 The healthcare industry, over many years, has been undergoing a gradual but major shift in how insurers pay providers. Against that backdrop, the state began implementing the Patient Protection and Affordable Care Act’s (ACA) mandates, several of which the federal government has delayed or amended since. The ACA or Obamacare, as it has become known, has caused additional … END_OF_DOCUMENT_TOKEN_TO_BE_REPLACED

It’s been a while now since the start of the nation’s recession that so harshly impacted Nevada. At its peak, in October 2010, the state’s unemployment rate hit 13.8 percent, and activity in numerous sectors dropped drastically. About two years ago, Governor Sandoval called for the creation of 50,000 Nevada jobs by the end of 2014. Numerous organizations—for economic … END_OF_DOCUMENT_TOKEN_TO_BE_REPLACED