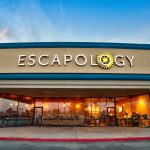 The clock is ticking, your heart is racing and an awful fate awaits. You need a way out, fast! All escape routes lead from Escapology, where experiences are built to thrill. Escapology, the U.S. market leader in escape games, opened a flagship 10-game venue at 2797 S. Maryland Parkway in Las Vegas. Six games (Cuban Crisis, Arizona Shootout, Budapest Express, Antidote, The3 … END_OF_DOCUMENT_TOKEN_TO_BE_REPLACED