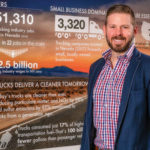 The future of Nevada’s business success could hinge on transportation infrastructure. According to multiple Nevada transportation officials, success with Nevada’s transportation likewise relies partially on the support of the Nevada business and real estate communities. “Communication with developers is critical,” said Rudy Malfabon, Nevada Department of Transportation … END_OF_DOCUMENT_TOKEN_TO_BE_REPLACED

According to the U.S. Census Bureau, Nevada’s 1.95 percent population growth rate from July 2015 to July 2016 made it the second fastest-growing state in the country, slightly behind Utah’s 2.03 percent. With the state’s official population nearing the three million mark, how is infrastructure keeping up with growth? The Orange Cone Zone Some of the funding for Nevada’s road … END_OF_DOCUMENT_TOKEN_TO_BE_REPLACED

Las Vegas Breaks Tourism Record According to data compiled by the Las Vegas Convention and Visitors Authority, Las Vegas has broken the city’s all-time record of visitation growth with 42.9 million visitors in 2016. This is the third consecutive record-breaking year with 2015 seeing 42.3 million visitors. In addition, convention attendance also broke records in 2016 with 6.3 … END_OF_DOCUMENT_TOKEN_TO_BE_REPLACED