State Gas Prices Among Highest in Nation According to a report released by AAA, Nevada motorists have been paying some the highest prices gas prices in the country. Despite the average cost of gas decreasing, the Silver State’s current average is $2.86 and the third highest in the United States. The data was released as part of AAA’s Fuel Gauge Report. The continued refinery … END_OF_DOCUMENT_TOKEN_TO_BE_REPLACED 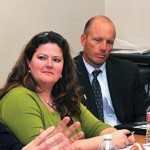