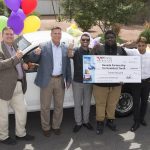 NV Energy officials and employees joined Nevada Partnership for Homeless Youth representatives to announce a new partnership to help youth in crisis and to donate a truck, toiletries and canned goods, and $20,000, the latter through the NV Energy Foundation. The announcement was made at NV Energy’s Ryan Operations Center. “We’re pleased to expand our relationship with Nevada … END_OF_DOCUMENT_TOKEN_TO_BE_REPLACED