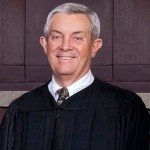 Justice James Hardesty filed for re-election in Carson City, seeking his third six-year term with the Nevada Supreme Court. Hardesty was first elected to the Nevada Supreme Court in 2004, and retained without opposition in 2010. He served as Chief Justice in 2009 and 2015, and successfully implemented Nevada’s Court of Appeals, which was approved by voters in 2014. Since its … END_OF_DOCUMENT_TOKEN_TO_BE_REPLACED