Credit unions are becoming an increasingly important source of loans for small businesses, a development that’s particularly welcome to credit union executives vexed by the need to put massive flows of new deposits to profitable use. At the middle of this year, small business loans at the 15 credit unions headquartered in Nevada stood at $640 million, a 63 percent increase from … END_OF_DOCUMENT_TOKEN_TO_BE_REPLACED 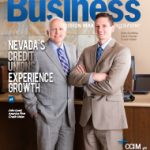 Despite new and ongoing challenges, Nevada’s credit unions are experiencing an upswing in membership and activity. Of the state’s 17 credit unions, the nine in Northern Nevada attained a record high membership of 112,347 by adding 3,973 individuals between the fourth quarters of 2014 and 2015, the most recent period for which Nevada Credit Union League (NCUL) data is … END_OF_DOCUMENT_TOKEN_TO_BE_REPLACED

During the recession, Nevada’s Boulder Dam Credit Union (BDCU) moved from the black into the red, primarily due to loan losses, said President and CEO Eric Estes. It weathered the financial decline by shrinking assets and shares. After three and a half years in the doldrums, the credit union’s health began to turn around. BDCU now has been profitable for about 18 months, … END_OF_DOCUMENT_TOKEN_TO_BE_REPLACED