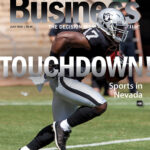 As the Vegas Golden Knights started their first season in 2017, few expected the magic that would ensue and catapult them to the Stanley Cup Final in the inaugural season. The doubts were so massive that before the season began, multiple articles ran expressing the feelings a hockey team in the desert could not succeed. Those feelings stem partly because the NHL’s expansion … END_OF_DOCUMENT_TOKEN_TO_BE_REPLACED