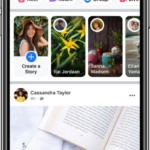 Meta, the parent company of Facebook, recently launched the Facebook's Feeds tab (previously known as News Feed), which makes it easier for people to not only find relevant content, but further customizes their experience on the platform. The Feeds tab, which started appearing in the shortcut bar of users’ Facebook apps starting July 21, will allow those using the platform … END_OF_DOCUMENT_TOKEN_TO_BE_REPLACED