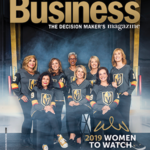 Women in Nevada are leaders, influencers, business owners, executives and mentors. Female executives are a vital part of the business community and are impacting the future of the Silver State in a variety of ways. The 2019 Class of Women to Watch are by no means “up and comers." Instead, they have each created a legacy and have made an indelible mark on Nevada. In the … END_OF_DOCUMENT_TOKEN_TO_BE_REPLACED

According to experts, the outlook for Nevada’s economy this year is positive and projected to fare at least as well as it did, or perhaps even better, in 2018. However, one or more known or unknown wild cards could have a dampening effect. Some of the indicators that support the forecast in Southern Nevada include strong employment and population growth, robust consumer … END_OF_DOCUMENT_TOKEN_TO_BE_REPLACED

NGKF Senior Managing Director Larry Singer is a scheduled contributor to the Nevada Business Commercial Real Estate Round table on Wednesday, October 5th 2016, at 12:00 pm. A 38-year veteran of commercial real estate, Mr. Singer leads one of the area’s most successful tenant representation teams and has maintained ongoing relationships with various national and local clients … END_OF_DOCUMENT_TOKEN_TO_BE_REPLACED

After finishing graduate school, Nevada resident, Adam Kramer, launched his own business, I Am America, which provided online video content for companies. Four years later, his wife landed an opportunity in Las Vegas, and the couple relocated to the city from Los Angeles. Kramer sold his business and found a job with the Las Vegas Chamber of Commerce as the director of its … END_OF_DOCUMENT_TOKEN_TO_BE_REPLACED