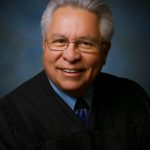 (Reno, Nev.) – The Honorable John Romero, Jr. of the Second Judicial District Court, Children’s Court Division in Albuquerque, N.M. will become president of the National Council of Juvenile and Family Court Judges (NCJFCJ) next July 2018. He will be the first president representing New Mexico in the organization’s 81 years. The NCJFCJ Board of Directors recently elected … END_OF_DOCUMENT_TOKEN_TO_BE_REPLACED