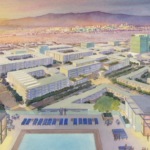 HENDERSON, Nev. — On Tuesday night, the Henderson City Council unanimously voted in favor of the proposed Regional Mixed-Use zone change for the 103-acre Henderson West proposed development plan. Henderson West, located along both sides of St. Rose Parkway in the West Henderson Planning Area, is envisioned as a new live-work-play community and western gateway to the … END_OF_DOCUMENT_TOKEN_TO_BE_REPLACED