Home Means Nevada Co. Clothing Goes Statewide The Reno-headquartered Home Means Nevada Co. clothing brand has announced the opening of its third Nevada location at the District at Green Valley Ranch in Henderson. The company began as a Reno t-shirt brand and has grown to represent the Nevada lifestyle on a national scale. The retailer has three locations in Nevada and has … END_OF_DOCUMENT_TOKEN_TO_BE_REPLACED 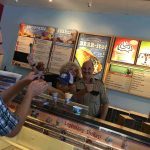 Ben & Jerry's Scoop Shops at the District at Green Valley Ranch and inside Sunset Station Hotel & Casino will offer Free Cone Day from 12 noon to 8 p.m. on April 4, 2017. A small cone or cup is free with no purchase necessary, with donations being accepted for the CASA Foundation. All flavors will be available, including non dairy. CASA volunteers advocate for the … END_OF_DOCUMENT_TOKEN_TO_BE_REPLACED

In 2011, almost 40 million people visited Las Vegas. Of those visitors, nearly 5 million were attending conventions and corporate meetings. In 2011 alone there were 19,029 conventions held in Southern Nevada, according to the Las Vegas Convention and Visitors Authority (LVCVA). In total, Southern Nevada offers about 2.6 million-square-feet in convention and meeting space, and … END_OF_DOCUMENT_TOKEN_TO_BE_REPLACED