A bright spot in Nevada’s economy, the tourism industry, has grown over the past few years and is a driving force behind Nevada’s comeback. In fact, the industry has grown to the point that Elko outgrew its convention center and Las Vegas plans to expand its facility. This hospitality/leisure sector accounted for 28.1 percent of the state’s total employment at the end of … END_OF_DOCUMENT_TOKEN_TO_BE_REPLACED

State Gas Prices Among Highest in Nation According to a report released by AAA, Nevada motorists have been paying some the highest prices gas prices in the country. Despite the average cost of gas decreasing, the Silver State’s current average is $2.86 and the third highest in the United States. The data was released as part of AAA’s Fuel Gauge Report. The continued refinery … END_OF_DOCUMENT_TOKEN_TO_BE_REPLACED 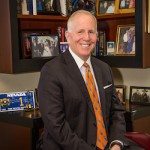 Founder Michael Dermody is recipient of the Dixie May Philanthropy Award The Children’s Cabinet’s has reason to celebrate its longstanding work in the community, keeping children safe and families together. The 17th annual Art of Childhood fundraising gala will take place Friday, September 18th at The Governor’s Mansion. Attendees will enjoy an evening in a tented garden … END_OF_DOCUMENT_TOKEN_TO_BE_REPLACED