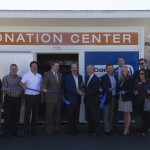 For the first time in Goodwill of Southern Nevada’s 40-year history in the greater Las Vegas area, a local bank is donating space at multiple branches for convenient attended donation locations for the local nonprofit. As of August 3, 2015, five new freestanding Goodwill donation locations are officially open in the parking lots at the following Bank of America branches … END_OF_DOCUMENT_TOKEN_TO_BE_REPLACED