RENO – The new 777 building in Midtown has finished construction and Japanese restaurant Bukko Island Sushi and Grill is the first to sign a lease. Bukko will bring a twist to traditional sushi and Japanese food found throughout the Northern Nevada area. Chef Betto Fierro, former chef of Hiroba in Reno, NV, is one of two owners and will be the head chef for the new Bukko Island … END_OF_DOCUMENT_TOKEN_TO_BE_REPLACED 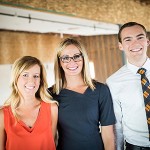