Nevadans owe state Republican Senators a debt of gratitude. In case you missed it, last month the state’s Supreme Court ruled the power grab by democrats during the 2019 legislative session was unconstitutional. By way of background, in 1994 the people of Nevada voted to change the constitution to require any bill that raises taxes to have a super majority vote in both … END_OF_DOCUMENT_TOKEN_TO_BE_REPLACED 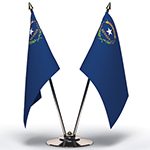 In Nevada, six constitutional officers comprise the state government’s executive branch. They are the governor, lieutenant governor, attorney general, secretary of state, state treasurer and state controller. All are elected to four-year terms and may serve a maximum of two terms. Next year, Nevadans will vote for all positions but governor. The primary obligation of these … END_OF_DOCUMENT_TOKEN_TO_BE_REPLACED