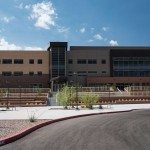 HENDERSON – Nevada State College’s newly expanded campus will serve as the venue for a CNN voter focus group in conjunction with the network’s Democratic presidential primary candidate debate on Tuesday, Oct. 13. The focus group will include 30 to 40 community members, who will provide opinions on the candidates’ performance during Democratic National Committee debate. The … END_OF_DOCUMENT_TOKEN_TO_BE_REPLACED