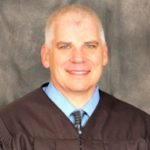 (Reno, Nev.) – The Honorable Egan Walker of the Second Judicial District Court, Family Division, Washoe County, has been elected to the National Council of Juvenile and Family Court Judges (NCJFCJ) as secretary of the board of directors. He has served on the NCJFCJ board for two years. “It is a great honor to be elected as secretary of the NCJFCJ by my peers,” said Judge … END_OF_DOCUMENT_TOKEN_TO_BE_REPLACED