City of Sparks Chamber of Commerce 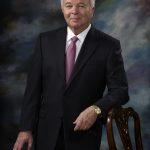 Reno – Woodburn & Wedge announced that former shareholder Edward G. Stevenson will return to the firm where he started his gaming law career more than four decades ago. He will serve as Of Counsel to the firm, which is Nevada’s oldest independent law firm. Stevenson is retiring this year from his role as President and CEO of the Shakopee Mdewakanton Sioux Community … END_OF_DOCUMENT_TOKEN_TO_BE_REPLACED