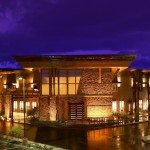 Company to become second largest distributed gaming operator in Montana, and one of the largest distributed gaming operators in the country LAS VEGAS - Golden Entertainment, Inc. (NASDAQ:GDEN) (“Golden” or the “Company”) announced it had entered into a definitive agreement to acquire substantially all of the assets of Amusement Services, LLC (“Amusement Services”). Amusement … END_OF_DOCUMENT_TOKEN_TO_BE_REPLACED