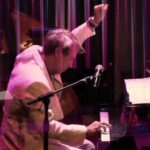 Danny Wright, an American Pianist and Composer, brings thoughtful and beautiful sounds through this heartfelt album . Wright has sold over 6 million albums since his debut in 1986. Danny Wright has released his newest album -"The Love Inside"-  featuring 14 original songs. One of the songs on the album titled "Love" has been dedicated to the memory of the children and … END_OF_DOCUMENT_TOKEN_TO_BE_REPLACED