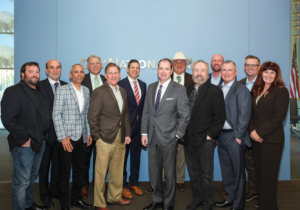 This page provides the latest feature content on the Nevada Construction Industry from Nevada Business Magazine, plus additional resources.

Over the past decade, builders and developers in Nevada have seen a host of changes and have had to adapt to a difficult and quickly changing economic landscape. Leaders in this industry recently met at the Las Vegas offices of City National Bank to discuss the future of building and development in Nevada.

Connie Brennan, publisher and CEO of Nevada Business Magazine, served as moderator for the event. The magazine’s monthly roundtables bring together industry leaders to discuss relevant issues and solutions. [Read the full story]

Safety on the Job: Practices and Procedures
Every Nevada employer is responsible for making certain their employees are trained in safety procedures and covered by workers’ compensation insurance. [Read More]

Industry Focus: Builders & Developers
In many ways the commercial real estate industry is thriving. While the industry isn’t facing the issues it was during the recession, builders and developers are facing and adapting to a new set of challenges. [Read More]

On the Upswing: Builders & Developers Experience Growth
Nevada commercial developers and builders reported that their workloads are full, but not without challenges. [Read More]

Nevada Subcontractors: Plenty of Work, Not Enough Workers
“I started working for our family business in 1973 and we’ve been through a lot of recessions, but none as long as the one that began in 2007,” said Bart Hiatt, president and general manager of A&K Earth Movers, Inc. [Read More]

Building & Development: A Rebounding Industry
The construction workers who left Nevada during the darkest days of the recession are coming back. However, construction executives are beginning to worry — not a lot, but a little — whether the flow of workers will be enough to meet the needs of an industry that’s recovering quickly. [Read More]

Nevada Infrastructure: Keeping Up with a Growing State
For more than 60 years, the Southern Nevada Home Builders Association (SNHBA) has been a leading advocate for housing in the state of Nevada.  [Read More]

On the Job: Subcontractors Critical to Construction Industry
According to the U.S. Census Bureau, Nevada’s 1.95 percent population growth rate from July 2015 to July 2016 made it the second fastest-growing state in the country, slightly behind Utah’s 2.03 percent. [Read More]

Commercial Builders: The Rebound and the Growing Pains
Whereas Nevada’s commercial construction industry was all but dead five years ago, today it’s alive, with activity edging up. [Read More]

Nevada Construction Collaborative: NCC is an effort by the following Nevada organizations to collaborate, rather than compete to establish, encourage, and enforce a thriving construction industry within the state.

Southern Nevada Building and Construction Trades Council:SNBCTC is an alliance of craft Unions that are the best choice for highly skilled and highly productive construction labor.