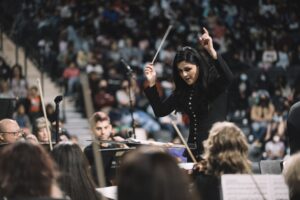 Bang! Opens with the most famous rivalry of DC Comics: Batman and Superman. The HSO will be performing Danny Elfman’s Batman Suite and John Williams’ Superman Suite. The concert will end with our ‘local hero,’ De Ann Letourneau, performing Sibelius’ Violin Concerto.

The HSO wants to highlight the sacrifices artists must make to succeed, including training, stress, psychological pressure, and competition to reach the big leagues of the Classical Music World.

“Most times the public does not realize the amount of time, effort and sacrifice we (artists) have to endure to become professional musicians,” said Alexandra Arrieche, Henderson Symphony Orchestra’s Music Director. “During the pandemic, we were considered non-essential, despite so many articles and studies demonstrating the many ways the arts help our brains and support good mental health.”

The Henderson Symphony Orchestra is the Silver State’s only community symphony orchestra that has been performing for 35 seasons delivering on its mission to promote Classical Music appreciation and education to a varied and diverse audience, and to elevate the southern Nevada art scene.

This season will also include a movie concert featuring The Princess Bride, a Veteran’s Day concert, and Holiday Jukebox among 10 performances culminating in June 2023.