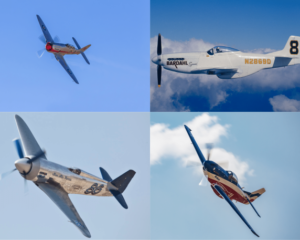 Hours of preparation, certification and practice brings one of the largest fields of racers to the outdoor event. This year boasts an exciting and competitive Unlimited field with Czech Mate returning from a five-year hiatus to square off against three-time reigning champion Dreadnought and fan-favorite Miss America for a chance to raise the Unlimited Gold Trophy. BARDAHL Special, a P51 that finished second overall at the very first Reno Air Races in 1964 while winning the Unlimited finale, will also be returning to Stead.

In the Biplane class, fans will get to root for Maj. Michael Brewer, a U.S. Air Force Thunderbird who flew on the demonstration team from 2018–2022 as both Thunderbird No. 3 and Thunderbird No. 4. While performing at the Air Races in 2019 and 2021, Maj. Brewer had the opportunity to experience the unique and exhilarating atmosphere and this year is making his race debut in No. 44, Big Cat.

2022 will also mark the second year of competition for the event’s newest racing class, STOL (Short Take-Off and Landing) Drag, with 20 competitors looking to take home the championship in the sport that has become a social media phenomenon.

Fans will see demonstrations by the U.S. Air Force F-22 Raptor, U.S. Navy F/A-18 Super Hornet, U.S. Air Force Heritage Flight, U.S. Navy Legacy Flight, Jim Peitz Aerosports and the GB-1 Gamebird. On the ground fans will get to experience the National Aviation Heritage Invitational, Military Static Display, GRADD-NVBAA STEM Education Discovery Zone, the racing pits where fans can get up close and personal with the pilots, planes and crew, and much more.

Qualifying begins Monday, Sept. 12 and racing begins Wednesday, Sept. 14. Tickets can be purchased online or by calling 1-800-514-3849 ahead of the event. For more information, visit AirRace.org.