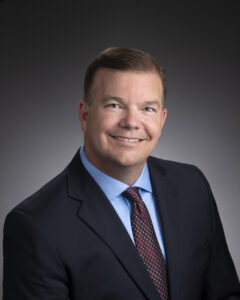 “As the city continues to mature it must address issues surrounding homelessness, redevelopment needs, and supporting our first responder community so they can stay in front of violent crime trends before they end up here. My focus will be on what I am calling a Public Safety Infrastructure, which is embodied by effective first responders, wise governance that focuses on smart growth, and increased community interaction,” said Seebock. “The City Council must continue to create opportunities for our community members to have an increased voice from HOA’s, neighborhood watch groups, as well as business coalitions and associations. My leadership and experience uniquely qualifies me to be the best candidate to address these big city challenges.”

Seebock has been a Henderson resident since his family moved here in 1986. While growing up, he attended Burkholder Junior High School and graduated from Basic High School. In 1993, he was hired on with LVMPD and was promoted through the ranks to his current position of deputy chief. He held positions of patrol officer, narcotics detective, K-9 handler, K-9 sergeant, counter terrorism lieutenant, and captain-level positions over patrol, training, and SWAT. Seebock’s leadership abilities were recognized by his promotion to deputy chief in 2020, a position in which he currently serves.

Over the course of his career, Seebock has been the recipient of the Unit Medal of Valor as well as several Meritorious Service Medals. During times of crisis, the LVMPD establishes a Department Operations Center to oversee and lead large critical events that impact our community such as forest fires, officers being killed, or other unforeseen events. He was charged with leading this operation center on numerous occasions over the last eight years to include the 1October mass shooting.

Seebock’s commitment to service extends to the community where he lives and is currently raising a family. He is a member of Central Christian Church and has been involved with various ministries over the last 25 plus years. Seebock volunteered and was appointed to the City of Henderson Civil Service Board in 2009 and then was appointed to the City of Henderson Parks and Recreation Board in 2012.

Additionally, he was a coach in almost every sport his children participated in to include T-ball, baseball, basketball, soccer, and flag football.

Seebock holds an associate degree from College of Southern Nevada in criminal justice, a Bachelor of Arts in Public Administration-Law Enforcement from Nevada State College, and a Master of Arts from the Naval Post Graduate School for security studies. He was selected to the Leadership Henderson Class of 2016 which is sponsored by the Henderson Chamber of Commerce. He has been married to his beautiful wife, Barbara, for over 25 years and they are the proud parents of 15-year-old twins who attend Foothill High School.