LAS VEGAS – Sportsman’s Royal Manor, an extended stay property in Southeast Las Vegas, continues to see a decline in crime. The management at Sportsman’s Royal Manor has focused on improving the conditions of the campus by investing more than a million dollars in upgrades such as new fencing, lighting, and landscaping as well as the hiring of a private security company, Trinity Security, which deploys two patrol guards to the property per shift. 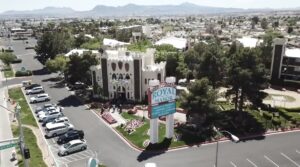 In addition to around the clock security patrol, management has made changes to the perimeter of the property, and strategically fenced it to reduce foot traffic and the number of nonresidents coming into Sportsman’s. The upgrades are not limited to the exterior, guests can enjoy kitchens with modern appliances as well as new flooring and fresh paint when they move in.

“We are proud of the progress we have made, and feel our property reflects a true sense of community,” said Sportsman’s Royal Manor Executive Manager Erin Ben-Samochan. “We realized we needed to be a part of the solution in our ultimate goal of crime reduction with a zero-tolerance policy.”

For three consecutive years, the Las Vegas Metropolitan Police Department has designated Sportsman Royal Manor a Crime Free Multi-Housing Certified Property. “That designation was a pretty big deal, but it doesn’t mean our efforts to improve end there,” said Ben-Samochan “That was just a good sign we’re doing things right.”