RENO, Nev.  – The Nevada Women’s Fund is pleased to announce renowned photojournalist, Marilyn Newton, as the 2022 Hall of Fame inductee. Newton will receive this honor at the annual Salute to Women of Achievement event, which will be held at Grand Sierra Resort on Thursday, June 30. 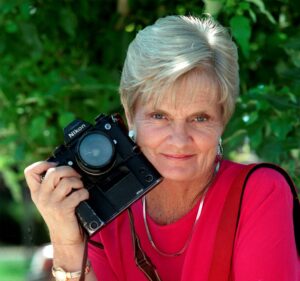 “We are honored to welcome Marilyn Newton into the Nevada Women’s Fund Hall of Fame where her contributions to photojournalism and our community will be celebrated by the women who have followed in her footsteps,” said Ila Achtabowski, President and CEO of Nevada Women’s Fund. “Her legacy will endure for decades through the other ambitious women she has influenced.”

Defined by her masterful photography and characteristic ambition and grit, Newton has been capturing the rich stories and unmistakable aura of Northern Nevada since 1957. At the age of 12, Newton asserted herself as a force to be reckoned with in the world of journalism, accepting one of the first paid papergirl positions in the country at the Nevada Appeal. Within a year, she wrote her first story and received her first photo publication in the same outlet.

In 1967, Newton joined the ranks at what is now the Reno Gazette Journal (RGJ); she has been lauded as the first woman hired as a full-time newspaper photographer in Nevada. During her 52-year career at RGJ, Newton’s lens bore witness to everything from law enforcement standoffs to presidential campaigns. Her hard-hitting and temporal photojournalism paved the way for countless women in the field and continues to inspire a new generation of ambitious female journalists.

Whether she’s strapping into a jet at the Reno Air Races or dusting her boots off for the Reno Rodeo, Newton has never been afraid to get her hands dirty in the pursuit of a story. Her tenacious spirit has always led her straight to the epicenter of Northern Nevada culture, allowing her to capture the raw and unfiltered realities of the region.

Her expansive collection of photographs has earned her 400 national, regional and state awards, including Nevada Photographer of the Year in 1992, an induction into the Nevada Newspaper Hall of Fame in 2002 and a Pulitzer Prize nomination.

An icon in the community, Newton will now take her place among the distinguished local figures she spent her career chronicling.

“I am truly honored to be recognized by such an incredible organization as the Nevada Women’s Fund,” said Newton.

For more information about the Salute to Women of Achievement Luncheon, visit nevadawomensfund.org or call (775) 786-2335.

About the Nevada Women’s Fund
Established in 1982, the Nevada Women’s Fund (NWF) works with community donors and supporters to raise financial contributions and other resources to support northern Nevada women and families. NWF identifies critical social needs and addresses them through the award of individual education scholarships and grants to community non-profit organizations that share the NWF mission to strengthen, empower and inspire achievement of women in our community.