David Kohlmeier and Danny Minor, two retired police officers best known for being the hosts of the popular podcast and TV show 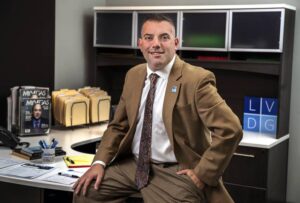 “The Problem Solver” have formed a new television broadcast- Las Vegas Crime Solvers. The show will offer reward money for community members if they are responsible for solving crime cases. Victims of crimes can appear on the show to discuss details of their crime incidents, hoping to gain justice and get the community involved.

Kohlmeier and Minor both recently garnered national and international attention when they announced a $5000 reward to any volunteer certified diver that found any bodies in barrels in Lake Mead in an effort to bring closure to cold cases and closure to the families of the victims.

CNN, The New York Times, The BBC, Telemundo, Fox News, ABC, CBS, NBC and Doctor Deliah were just a few of the media to interview the former police officers regarding the bodies found in Lake Mead.

Two new Las Vegas Crime Solvers phone numbers have been set up to receive crime tips or information and to pay out reward money- 1-833-LVCRIME and 1-833-TIPSCASH
To appear on the show or to get more information visit www.LasVegasCrimeSolvers.com or call 1-833-LVCrime