NASHVILLE, Tenn. – Country hit-maker Lacy J. Dalton is the only female vocalist featured on Willie Nelson’s album, ‘Half Nelson’ which reached Billboard’s Top 10 position. Dalton recently received a Platinum Award for the album on which she recorded her duet with Nelson, “Slow Movin’ Outlaw,” a classic Texas outlaw ballad. 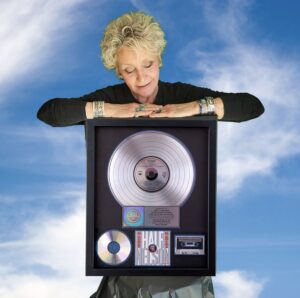 The album contains duets performed by Nelson along with other legendary artists and resulted in multiple hits including “Pancho and Lefty” with Merle Haggard, “Seven Spanish Angels” with Ray Charles, “To All the Girls I’ve Loved Before” with Julio Iglesias, as well as duets with George Jones, Hank Williams, Leon Russell and more. Dalton is honored to be recognized for her outstanding participation on the ‘Half Nelson’ album!

“To be the only woman in the company of such greats as Ray Charles, Carlos Santana, Neil Young, and Willie himself was a high point for me and an important milestone in my career, and I believe for women in country music in general,” shares Dalton.

Dalton continues to celebrate the 40th anniversary of her million air-play song, “Everybody Makes Mistakes,” having recently released an acoustic video of the 1981 hit single. From her album “Takin’ It Easy’.” the song reached number 5 on the Billboard Hot Country Singles & Tracks chart. The emotional tune was co-written by Dalton and producer Billy Sherrill and has remained a fan favorite over the years and is reputedly the most played song of hers in the USA. Dalton channeled the heartfelt sentiments that we all face throughout life when it comes to all decisions, good or bad. The acoustic version of “Everybody Makes Mistakes” was premiered by Country Rebel.