HENDERSON, Nev. –  The Henderson Professional Fire Fighters, Henderson Hospital and the City of Henderson are launching their “Safe Pools Rule!” campaign. The goal of the campaign is to remind families of the importance of being vigilant around littles ones when enjoying the pool and to remember the three Ps: Patrol, Prepare and Protect. 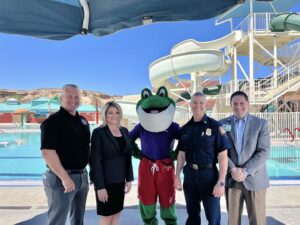 Drowning is a leading cause of preventable and unintentional death for young children in Southern Nevada. In 2021, there were 21 submersion incidents reported with 7 of them being fatal drownings. Firefighters were on hand to illustrate how a tragedy can happen in just seconds if children are not being supervised by staging a mock drowning.

“We are grateful to be a part of this grassroots community effort, with the ultimate goal of saving lives through messages of pool safety and drowning prevention” said Pentkowski.

The Safe Pools Rule! campaign was developed over a decade ago, to stop preventable deaths by drowning.