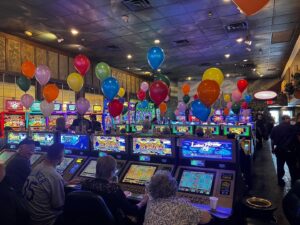 The Emerald Island Casino, previously known as the Pot of Gold Casino, was bought by twin brothers Tim and Mike Brooks in 2001. The property was remodeled and rebranded in 2003 and is now considered a top choice for locals.

“We couldn’t think of a better way to celebrate yet another anniversary than surrounded by our wonderful guests, many of which are regulars,” said Tim Brooks, co-owner and general manager of Emerald Island Casino.

The Brooks brothers saw such success with their purchase of the Emerald Island Casino, in 2020 they bought the Rainbow Club Casino from Peppermill Casinos. The property, located across the street from Emerald Island, underwent an extensive interior and exterior redesign and it re-opened under its new owners in September 2020.