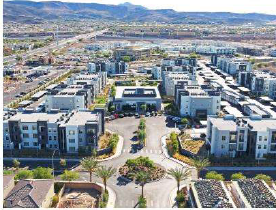 “Rents continue to rise as demand continues to grow, especially from people moving here from out of state,” said NVSAA Executive Director Susy Vasquez. “Local rents are still lower than the national average apartment rent of $1,584 per month during the first quarter. We expect rents to continue increasing this year, but at a more gradual pace than during the past year.”

Vasquez noted that CoStar’s latest forecast expects local apartment rents to increase by about 5.5% by the end of 2022 compared to one year earlier. That’s a slower growth rate than the 7-8% annual increase that CoStar was previously projecting. It’s also more in line with pre-pandemic trends, she added.

Meanwhile, local apartment vacancy rates remain stable, with the average vacancy rate during the first quarter of 2022 at 5.4%. That’s up 0.3% from the same time in 2021.

As the pandemic wanes, NVSAA sees signs that the local apartment market is starting to return to more normal and seasonal trends. According to Vasquez, “a healthy market can be best described as low demand at the beginning of the year, ramping up a bit during tax season, slowing again until it throttles into high gear once school ends for the summer before slowing back down at the end of October through the holiday season.”