You are here: Home / Press Release Wire / Google Announces Plans to Invest Over $30 Million in Nevada This Year

Company Shares US Job Creation and Site Investment Plans for 2022

Henderson, Nev. – Google announced plans to invest over $30 million in Nevada in 2022 at an event held today with Senator Jacky Rosen and Google.org President Jacquelline Fuller at the company’s Henderson data center. Nationally, Google plans to invest approximately $9.5 billion in offices and data centers and create at least 12,000 new full-time Google jobs across the U.S. this year. 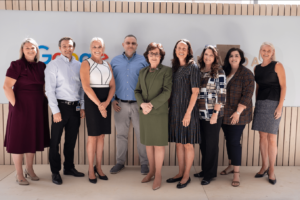 “Google’s offices and data centers provide vital anchors to our local communities and help us contribute to their economies. As we embrace more flexibility in how we work, we believe it’s more important than ever to invest in our campuses and that doing so will make for better products, a greater quality of life for our employees, and stronger communities,” said Sundar Pichai, CEO of Google and Alphabet. “That’s why we’re planning to invest approximately $9.5 billion in U.S. offices and data centers this year, creating more than 12,000 Google jobs in communities across the country.”

Google has called Nevada home since 2019 when the company broke ground on its data center in Henderson, which it is continuing to invest in. Its second Nevada data center, located in Storey County, became fully operational in February 2021, with plans to expand it.

“As the only former computer programmer in the U.S. Senate, I appreciate how important data centers are for our cybersecurity infrastructure and supporting technological innovation,” said Senator Rosen. “Google’s $30 million investment in Nevada and its data centers will help bring even more economic development and good-paying jobs to our state.”

Google and the State of Nevada also announced they are partnering to help Nevada’s workers develop digital skills to grow their careers. Together, they will offer Google Career Certificates to help people find high-growth, high-paying jobs with support from the Nevada Department of Employment, Training and Rehabilitation, a National Association of State Workforce Agencies (NASWA) partner. Nevada has created resources in Spanish to support their large Spanish speaking population, a critical resource that now supports all NASWA agencies. This initiative is led by the State of Nevada’s Employment Security Division.

Google also released their 2021 Economic Impact Report for Nevada today, sharing how Google helped provide $5.4 billion of economic activity for tens of thousands of businesses in Nevada who used Google products last year to increase their online presence and connect with the people and communities they serve.

Henderson-based business Tea and Whisk was highlighted in Google’s Economic Impact Report for Nevada in a case study that details how they used digital tools to reach customers. Tea and Whisk began as a cafe, but COVID-19 led founder Leo Lukidi to pivot to sales and one-on-one sessions, where he could educate customers on brewing and enjoying tea as it was done 2,000 years ago. Their Google Business Profile helps customers find the store. In 2020, Lukidi began using Google Ads to find more future tea lovers for both in-store classes and website sales, leading to 50 percent of new customers from online leads.

“I was so surprised by the number of sales that came from Google Ads,” said Leo Lukidi, founder and owner of Tea and Whisk. “I looked at the data after six, seven, eight months–it was really incredible!”

About Google in Nevada

Google has called Nevada home since 2019, with data centers in Henderson and Storey County. The company has partnered with trusted community institutions across the state to bring digital skills training, grant funding, and other resources to more Nevadans. In Nevada, Grow with Google has partnered with more than 60 organizations to train more than 88,000 Nevadans in digital skills, including public libraries, chambers of commerce, community colleges, and more. Google.org has awarded over $1 million in grants to nonprofits and organizations based in Nevada.Since 2014, Google’s employees based in Nevada–including company matching contributions–have donated over $409,000 in charitable giving to nonprofits. Learn more about Google in Nevada at: g.co/economicimpact/nevada