You are here: Home / Press Release Wire / Celtic Celebration Ceilidh and Concert To Be Held on May 21st

The Northern Nevada Celtic Celebration and others are co-sponsoring a free Ceilidh and Concert featuring local favorites The Blarney Band and The Fire: Scottish Band on Saturday, May 21st in the 400 block of East Fourth Street near the corner of Valley Road in what is known as the “Downtown Reno Brewery District.” 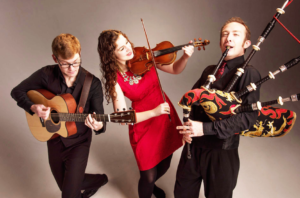 There will be food trucks, Celtic organization tents and performers related to the festival in the shared parking lot of Black Rabbit Mead Company, Lead Dog Brewery and Nevada Sunset Winery, who are also co-sponsoring the event along with the Sons & Daughters of Erin. A Ceilidh (pronounced “kay-lee”) is Gaelic for party or celebration.

The Celtic Celebration Board announced last month that due to unexpected expenses and lack of revenue to support those costs, the 2022 festival on the same May 21st date at Bartley Ranch Regional Park was cancelled. Since the organization was contractually obligated to compensate the bands, the board elected to offer a free concert as part of a dissolution plan for their non-profit organization by the end of this year. The Celtic Celebration is presenting this event as a free concert to the Northern Nevada Celtic Community and as a way of thanking them for all of their support over the years.

The Blarney Band, a father and son duet, consist of Keith and Daniel Shannon blending strong harmonious voices with a variety of instruments, in order to successfully present an array of Irish, Scottish, and Celtic music.

The Fire is a high energy traditional music band that combines world class performances of blazing Scottish music with a distinctly Californian flare. The group includes International Scottish Fiddle Champion Rebecca Lomnicky, dynamic bagpiper and multi-instrumentalist David Brewer, and Royal Conservatoire of Scotland graduate Adam Hendey on guitar, bouzouki, and harmonium. All three band members have lived and studied in Scotland, and work together to further contribute to the traditions of Scottish music in America through performances and tours, as well as workshops funded by agencies such as the National Endowment for the Arts.

Together, The Fire performs captivating, contemporary Celtic music which bridges the gap between the coasts of California and the highlands of Scotland —two worlds united, into a heartfelt and rousing musical experience.

The Fire has developed their local following by playing at the Brewery Arts Center Celtic Series Shows in Carson City, the NSSC Burns Dinner and at private performances at local residences.

More details on times, other performers and vendors will emerge as the event approaches For more information and to discuss how you can participate or contribute, please call 775-378-0931.