You are here: Home / Press Release Wire / ‘The Great Western Steam Up’

‘The Great Western Steam Up’

The event will include a historic gathering of steam locomotives at the Nevada State Railroad Museum, train rides, live entertainment, food and more.

(Carson City, Nev.) – The Nevada State Railroad Museum in Carson City, Nev. will host a once in a lifetime event July 1-4 to celebrate the 150th anniversary of the completion of the Virginia & Truckee (V&T) Railroad linking Virginia City and Carson City with the world. Complete with 17 steam locomotives from throughout the West including nine operating steam locomotives representing six different historical Nevada railroads, event organizers will be pulling out all the stops to celebrate the history and heritage of Nevada’s famed V&T Railroad. 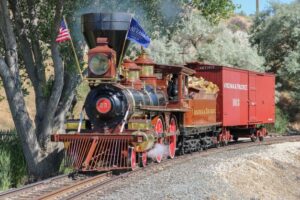 “We are excited to offer a lineup of historic steam locomotives unlike anything seen in the State of Nevada in over 75 years,” Daniel Thielen, director of the Nevada State Railroad Museum in Carson City, said. “The Great Western Steam Up will be an unforgettable celebration of Nevada’s railroads and our steam-powered heritage.”

Featured steam locomotives that will be in operation:

The event will also feature a reunion of V&T locomotives including No. 1 “Lyon,” No. 11 “Reno,” No. 12 “Genoa,” No. 18 “Dayton,” No. 21 “J.W. Bowker, No. 22 “Inyo,” No. 25 and No. 27. This will constitute the largest gathering of V&T locomotives in 75 years. In addition to the historic gathering of steam locomotives, the event will feature other steam-powered equipment including fire pumpers, automobiles, tractors and a steam “donkey” engine, all in operation. “Lost art” displays such as blacksmithing, knife making and more will also be featured.

“This event celebrates an important milestone in the history of Nevada and the West with operating steam-powered equipment that will be exciting for both railroad fans, families and visitors to the area over the holiday weekend,” said Todd Moore, president of the Friends of the Nevada State Railroad Museum. “We will have train rides behind the visiting locomotives, live entertainment, food vendors, a beer garden, an event store and plenty of other attractions to make for a fun and exciting day.”

Event tickets are on sale now. All proceeds will benefit the Nevada State Railroad Museum in Carson City. Event information, schedules, ticket sales and more are available at greatwesternsteamup.com.