LAS VEGAS – On March 10, Goodwill of Southern Nevada (Goodwill®) hosted 25 international military students from the Air Force’s Air War College during their visit to Las Vegas. The Air War College, a professional military university that educates and prepares senior military officers, selected Goodwill because of the nonprofit’s mission, substantial impact on the local community, and programs that aid veterans and their families during their transition from military to civilian life as well as career advancement for active military spouses. 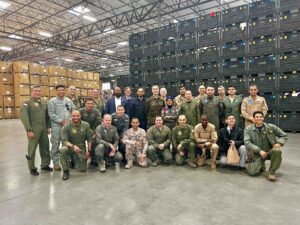 “It is an honor to have the Air War College choose our organization for close-up study during their visit to Las Vegas,” said Rick Neal, president and CEO of Goodwill of Southern Nevada. “I am proud to showcase our organization’s regional impact and the behind-the-scenes work that makes it possible. Across the country, Goodwill is a pillar of support to not only those looking for budget-friendly clothing and household items, but also to those looking for assistance in finding employment.”

This is not the first time Air War College students have benefited from a first-hand look at Goodwill, which has a presence in 12 countries outside the United States and Canada. Last year, an Air War College class learned about Goodwill of Southern Nevada’s mission, facilities, and community impact. During their visit, students learned how nonprofits like Goodwill use their social enterprise business model to sustain high-impact programs that create jobs, provide free career services, and boost recycling and environmental efforts.

Learn more about Goodwill of Southern Nevada’s mission at GoodwillVegas.org.