Nevada Public Radio announced today that Mark Vogelzang, a seasoned public broadcasting nonprofit leader, will join Nevada Public Radio in March as its new President and CEO. Most recently, he has served as Interim General Manager and CEO of Blue Ridge Public Radio based in Asheville, North Carolina, a regional NPR News network of 19 FM signals. 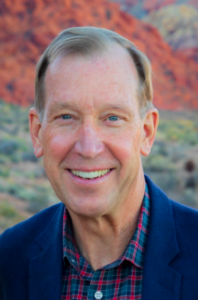 “The Board and I are confident that Mark is the right person to build on the momentum started by Jerry Nadal and his team,” said Richard Dreitzer, Board Chair, Nevada Public Radio. “Mark brings a wealth of experience and expertise to this role, and we’re lucky to have him as our next CEO.”

Mark had a decade-long tenure as President and CEO of the state-wide Maine Public TV & Radio, the PBS and NPR member network. During his time, Mark made a lasting impact, positioning the institution as the state’s leading source of news, information, and entertainment. At the heart of Mark’s vision for Maine Public was elevating his organization’s journalistic and fundraising efforts, expanding regional news, focusing on serving the audience, and offering more choices than ever before.

Among a host of initiatives envisioned, Mark launched a new, dedicated platform for classical music. The Maine Public Classical Radio network celebrated its fifth anniversary in 2021 with seven FM stations across Maine. Mark has been Maine Public’s guide, at the helm through the development of two strategic plans and two capital campaigns.

Mark received his Bachelor of Arts degree from Dordt University in Iowa, where he also began his broadcasting career at the campus radio station. He is widowed, has five adult children and several grandchildren. Mark serves on several nonprofit boards, is a serious amateur photographer, and enjoys cycling the backroads and hills from Acadia to Red Rock.

Nevada Public Radio was established in 1975 as an independent, not-for-profit, public benefit corporation. NVPR signed on the air in 1980 with one station serving the Las Vegas area as Nevada’s first National Public Radio (NPR) affiliate station. For four decades, NVPR has remained true to its mission to enhance the quality of life and foster civic engagement by informing, educating and inspiring a growing audience through public media – including content on air, in print and online.