LAS VEGAS— Nevada Donor Network (NDN) is pleased to announce Jan Jones Blackhurst has been appointed Nevada Donor Network Foundation (NDNF) board chair and Shelley Berkley has been appointed vice chair. Jones Blackhurst is the former mayor of City of Las Vegas, a member of the Caesars Entertainment Board of Directors and sits on NDN’s governing board. Berkley is a former congresswoman and serves as the CEO and senior provost for Touro’s Western Division, the administrative and academic head of the Nevada and northern California campuses of Touro University. 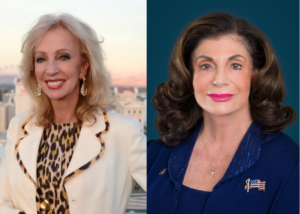 Both Jones Blackhurst and Berkley joined NDNF in 2020, serving as founding board members. Their backgrounds and combined decades of  leadership experience will help the NDN’s mission to maximize the gift of life and health through organ and tissue donation.

Jones Blackhurst brings over 20 years of executive experience from Caesars Entertainment Corp., serving as the executive vice president of public policy and corporate responsibility since 1999 and has also served as chair of the Caesars Foundation. In addition to serving as board chair for NDNF, Jones Blackhurst serves on the U.S. Chamber of Commerce Board of Directors and the Women’s Leadership Board at the John F. Kennedy School of Government at Harvard University. She is also chairwoman of the Nevada Resort Association and Las Vegas Stadium Authority.

Prior to joining Touro in 2014, Berkley served the state of Nevada in the U.S. House of Representatives from 1998 to 2013. In addition to serving as board vice chair for NDNF, Berkley is currently serving on numerous local and national boards, including:  The Anti-Defamation League, National Osteoporosis Foundation, Las Vegas Global Economic Alliance and The American Lung Association. Berkley was appointed and twice elected to the Nevada State Board of Regents, serving from 1990 to 1998. Prior to this, Berkley was an attorney for the Nevada State Commerce Department, in-house counsel for Southwest Gas Corporation, and vice president for Government and Legal Affairs for the Sands Hotel in Las Vegas.